Sven is Head of BioData-Innovation at Eagle Genomics. In this article he discusses the role of data reuse in cutting lab waste and working towards a more environmentally sustainable future for life sciences R&D. 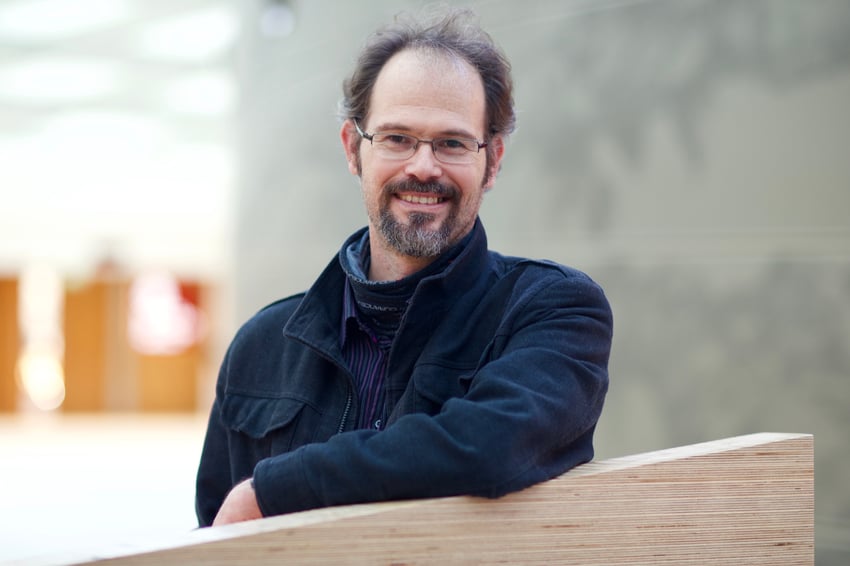 As of this year my role is head of the biodata-innovation team. Our scientific focus is all aspects surrounding the microbiome and linking these to questions of human health and well-being. This is a great role for me as it brings my academic background to bear to help identify future solutions that enable the generation of new insight. I focus on the biological elements of the e[datascientist] platform and, as an ex-researcher, apply my knowledge to the data challenges our customers face.

I started at Eagle Genomics as a Solution Architect where I was positioned between the development team and the customer in order to tease-out customer requirements and workout how to translate these into features to be created by our production team.

That was a completely new role to me because all my life I’ve been an academic and full-time researcher, so it was a big change but one I really enjoyed. I’ve always had my eyes open to industry and it was an exciting time to make the transition to work in this cutting-edge space.

My work is now mainly computational, as well as scientific, and includes the new angle of product development.

Q: What is the role of life sciences data in innovating a more sustainable future?

Data is the raw material from which science draws insight to enable innovation. There’s a lot of plastic and a lot of waste that goes into producing a single dataset. As an ex-researcher I have seen this first hand. Part of my role was making sure the lab was fully-stocked and up-to-speed. That always involved having a huge volume of plastic in the lab!

When I was doing my PhD I remember my supervisor telling me that he worked so hard he could fill a whole wheelie bin with plastic in a single day. For him that was a sign of output! I’m not sure if it was 100% true but in the lab, even if you’re just one person, you certainly do get through a huge amount of resources as you always have to work with sterile materials and make sure you’re not cross contaminating anything. For example, when working with liquids, at each step of a protocol a fresh pipette tip has to be used. Each of those tips is used alongside a sample tube, also made of plastic, and which can also only be used in a single process.

When carrying out this kind of work a researcher can easily go through hundreds of tubes and pipette tips a day. And that’s just a single researcher! But when you stop and think about it, all of that plastic is contained in the results of that experiment; the dataset outputted by the researcher. What if that dataset could be reused? That volume of plastic doesn’t have to be used again if another researcher can access those results.

Reusing data will result in a massive reduction in plastic waste as well as help organisations save money which would otherwise be spent on purchasing costly materials. The environmental impact of data reuse is significant but the potential implications are yet to be fully realised.

Q: It’s estimated that research labs contributed 2% of global plastic waste in 2014, why do labs produce so much plastic waste and how can it be safely reduced?

The life sciences require a cultural shift in order to successfully reduce waste plastics. I know that universities are now much more cognisant of the environmental impact of their research and many labs are taking important and meaningful steps to actively reduce the amount of waste they produce. However, I think most organisations are still far from being fully on board with establishing sustainable approaches, which could go as far as impacting the way researchers design their experiments.

For example, an experiment could be structured so that the resulting dataset will answer more than one question rather than researchers having to carry out two experiments using twice as many resources to produce two similar sets of results. If labs could collaborate and share, for example, the same control data, plastic waste for that experiment could be reduced by approximately 20-30 percent.

Of course this all requires coordination, careful communication and getting multiple teams of people to agree! It also requires a lot of overhead, which I think would be time well invested. While this might be harder to do in an academic setting it could very well be possible in the areas where this has the potential to have the biggest impact, namely industry and contract research organisations (CROs). These are organisations that are outside of the public eye, but the huge and growing amount of contract research being carried out for all kinds of companies, including food and pharmaceuticals, means that sustainable practices are only going to become more relevant and more important.

Q: How can the cultural shift towards data reuse be encouraged?

First of all there is a money implication; using less plastic = less money. There are also outside influences, such as the climate change goals on single use plastics, so there could be increased legislative and public pressure put on these organisations, but good-will is just as important. I don’t think alienating people is a good way of going about this. I am at heart a scientist and I know that this research is vitally important.

I think that data reuse is a very attractive option because the way experiments are carried out doesn’t have to change radically but the output can be easily reused. Cultural shift is a difficult problem and it will take time but it’s important to use the carrot as well as the stick!

Q: How is Eagle’s e[datascientist] enabling organisations to become more sustainable both in terms of products produced and research practices?

Our e[datascientist] platform aims to overcome the technical challenges inherent in data integration to enable organisations to safely, and with confidence and trust, draw in and reuse external data to support their own research. In this way the platform will help researchers to uncover novel discoveries and supporting evidence which enables the development of new products and solutions supported by verifiable data science and developed utilising sustainable practices.

Like using glassware instead of plastic, we’re building a system where data that has been used to prove/disprove one hypothesis can be reused in a different context, rather than just being discarded. Importantly, the first and last person to use the dataset get exactly the same data and quality of information; unlike materials and tools data is not ‘degraded’ with each use.

Q: In the future, how do you think data reuse will impact research, in terms of environmental sustainability and beyond?

Lots of this still remains to be seen. At Eagle Genomics, in terms of data reuse and sustainability, our first priority is to get this message heard and make organisations and researchers aware that data reuse is a powerful method for reducing environmental impact with minimal disruption to the traditional methods used in the wet lab.

It is then up to individual organisations as to how they take this concept forward, from simple day-to-day changes, right through to experimental design and data reuse. There‘s a huge amount of scope but this all requires conversation and for organisations to understand that sustainable practices have to be approached in a serious and structured manner which requires collaboration and innovative technical solutions.

Q: Tell us one thing about yourself we couldn’t find out from Google.

I travelled a lot as a young kid and that had a big impact on me. This is because my late father was a very adventurous person; he was a strange mixture of a pure intellectual who would have been happy to spend his whole life at a desk and somebody incredibly outgoing who loved adventure and the outdoors. When I was seven, he took me to Kabul in Afghanistan! We were travelling back from India to Germany and he happened to suggest, ‘Why not stop in Kabul?’. This was in 1979, the year before Russia invaded Afghanistan, which of course we had no idea about at the time!

We landed in Kabul and went round town looking for somewhere to go for dinner. My parents went into a place that looked like a restaurant but immediately came running back out - which I remember thinking was very bizarre! Years later they told me that it was actually an opium den - at that time opium was very prevalent in Kabul -  anyway, we ended up having dinner somewhere else!

The whole trip left a big impression on me because it was a completely new environment; the people were amazingly friendly, the food was delicious and it was a place that is now very, very hard to get to. It’s given me a deep sense that there are places out there that are very different to those I inhabit and has given me the curiosity to always look around me for new ideas and experiences.